With coaches Trevor Bayliss and Paul Farbrace taking some time off after a couple of difficult tours to the sub-continent, I snatched at the chance to take charge of the England cricket team on a part-time basis. I was humbled to lead a Test side to Ireland and for England to be the opponents in our hosts’ first ever Test match, a one-off day/night affair at Malahide. I opted to rest Moeen Ali, Stuart Broad and James Anderson and presented Test caps to county stalwarts James Hildreth and Mark Footitt as well as Footitt’s Surrey teammate, South African born youngster Tom Curran. Following the difficult decision to remove Alastair Cook from the position of captain, Joe Root had the honour of leading the side for our nation’s first ever day/night Test match. 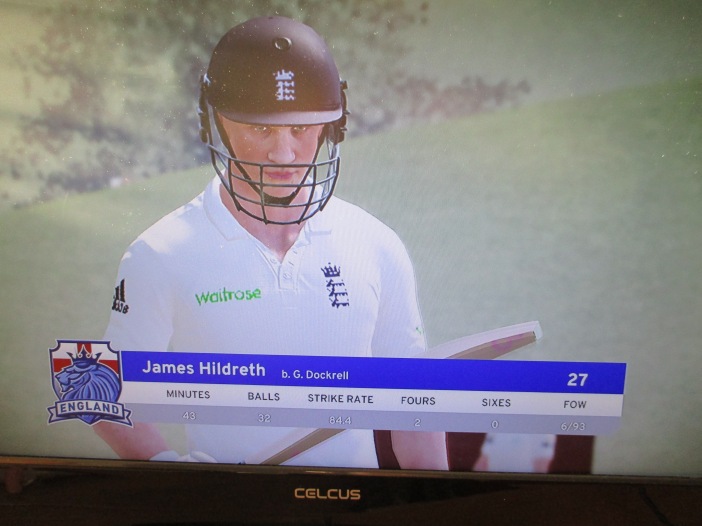 Having been put into bat by Ireland skipper William Porterfield, we slumped to 36-4 before debutant James Hildreth went about rebuilding the innings. Unfortunately when the Somerset batsman was dismissed for a Ramprakashesque 27, we found ourselves in dire straits at 93-6!

This isn’t quite how I had envisaged things at the end of day one. Just look at all those Ramprakashes! (That’s slang for 27). We were bowled out just before lunch with only a last wicket stand of 59 between numbers ten (Jake Ball, 27) and eleven (Debutant Mark Footitt, 35 not out), saving face for my troops. Ball and Footitt were actually smacking the ball to all parts and only when, as lunch approached, ‘they decided to bat properly’ did Ball get run out. On the plus side another debutant, Tom Curran, was swinging the ball like… well, a swing, to help make inroads into the Irish batting line-up. 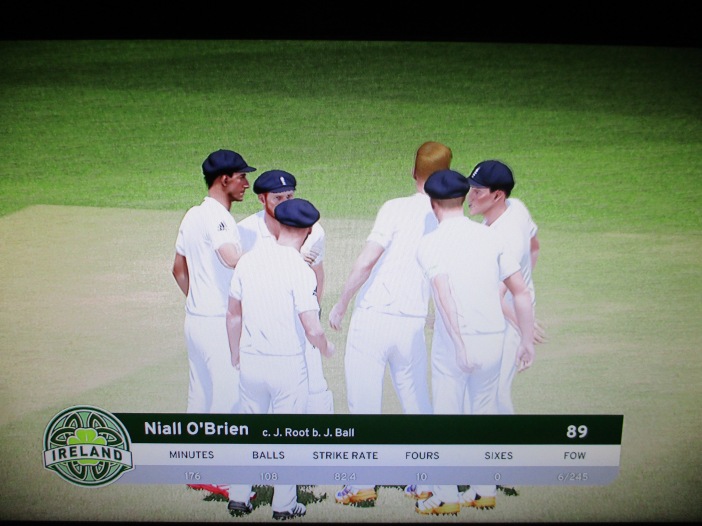 After a difficult night’s sleep in the team hotel, it was a relief when Jake Ball eventually dismissed Niall O’Brien for 89 early on the second morning. That wicket provided our players with great hope of limiting the first innings defecit…

… unfortunately we then watched in horror and were powerless as Ireland’s number ten, ex-England Test cap Boyd Rankin (55) led the way in a partnership of 93 with Niall’s brother Kevin. When Ireland finally declared on 439-9 the younger O’Brien brother was left undefeated on 127.

In our second innings, opening batsmen Haseeb Hameed and Keaton Jennings constructed an attacking partnership as we attempted to eat into the first innings defecit. After racing to 47 without loss Hameed had his stumps rearranged on 26 and almost immediately after that Jennings was caught behind for 20 with both openers falling to our nemesis Rankin. Our middle-order batsmen then struggled to adapt to the pink ball coming at them under lights with Bouncing Boyd in particularly hostile form.

When Ben Duckett, who seemed to have weathered the worst of the tempest was run out for 35, our hopes had all but faded…

… but a counter-attacking innings of 46 off 28 deliveries from Adil Rashid gave us hope of avoiding an innings defeat and possibly taking the match into a third day.

It wasn’t to be however as Ireland ran out comfortable winners by an innings and 37 runs. I haven’t heard from Andrew Strauss and fear that the offer of a full-time position may have been retracted!