In my first season with my club side Leeds, I was dismissed in the nineties on two occasions in the three-day format before under performing somewhat in my one-day and T20 outings. During the 2019 season, I hoped to write the wrongs of those ‘close but no cigar’ moments but at first struggled to do so. I was gutted to make only 9 in my first visit to the crease of the new campaign but followed up with a composed 81 in the second innings. There then followed a frustrating runs of scores: 11, 32, 11, 20, 19 & DNB, so the pressure was on come the final match of the season at home to Hull.

I’m delighted to say that I removed the cheeky monkey from my back and recorded my maiden century in club cricket. Oh and I achieved it in style too and with added panache! When on 94 and following a couple of dot balls, I cleared the ropes with an almighty six to send the small but passionate home crowd into delirium.

… and I didn’t stop there! I determined not to be content with merely one hundred and go onto make a daddy hundred. I combined finding the boundary with working the gaps and went onto turn my maiden century into a double. Once again the loyal home faithful went berserk!

Just look how happy I was upon completing my double-hundred. Though it would’ve been easy to have become overcome with emotion, I remained focused and continued to churn out the runs.

My career best knock eventually came to an end late on day one, courtesy of a fine reaction catch by Hull’s short leg fielder off the right-arm pace bowler. 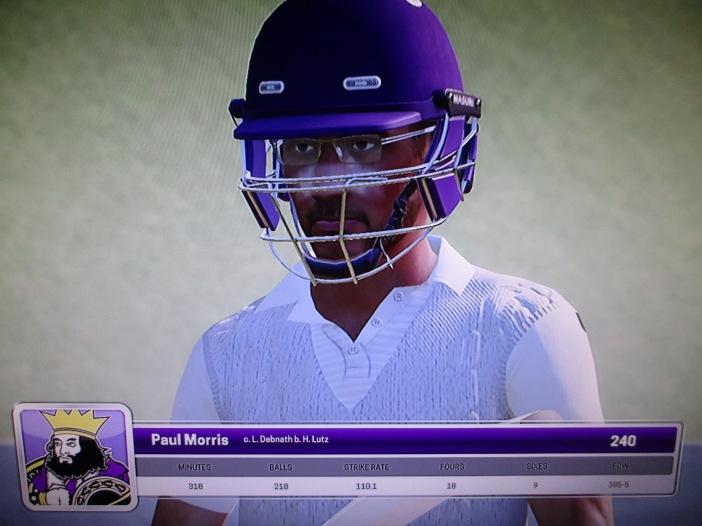 Having accumulated only 183 runs in seven innings prior to my epic knock, I had clocked up 240 come my downfall against Hull. That meant I finished the 2019 three-day season with 423 runs at an average of 52.88 which placed me fifth in the run-scoring charts. My 218-ball vigil meant that I recorded the highest individual score in the league by just one run!

Last season I had batted exclusively at four in the longest format before dropping to five for the limited overs affairs. In the first four matches of the 2019 season, I disappointingly found myself down at five in the order. Seeing that I needed time in which to construct the sort of innings that I’m capable of, Leeds boldly pushed me up to first-drop for the final match of the season. How I rewarded them! Hopefully I’ve cemented my place at number three in the order come the 2020 three-day season. It’ll be interesting to see where I find myself positioned in the batting line-up for this season’s one-day and T20 tournaments.

Back to my 240, you’ll see that I scored runs all around the wicket. Off-side, leg-side, square, leg, you name it, I scored there. Now it’s about adapting my game to the shorter formats and having more productive 2019 campaigns than I did in 2018. I’ll be looking to pass 1000 career runs across all formats early in the one-day season. Hopefully we can avoid the mid-table obscurity we finished with in the three-day season and reach a couple of finals-days. It’d be the least we can do for our supporters!

Disclaimer: Please don’t think that Pro level is too easy. I’d been struggling but batted well to get to a maiden hundred. Having got there, as a player will do in real life, I determined to knuckle down, not throw my wicket away and go big!