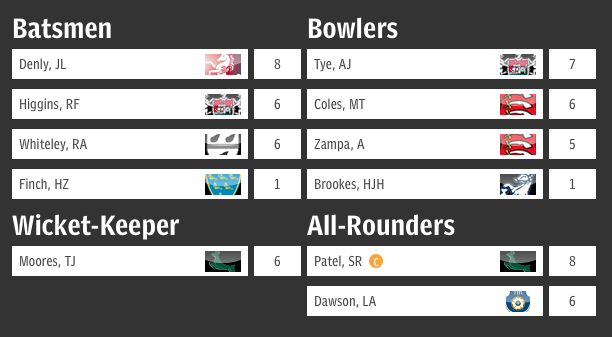 Here’s my Telegraph Fantasy Cricket team for the T20 competition.

Sticking to my tried and tested formula, I’ve selected batsmen that can bowl. Kent’s Joe Denly will surely contribute with the white ball and Ryan Higgins is definatley an all-rounder. He’s been opening the bowling for Gloucestershire in First Class cricket this year following his move from Middlesex. Ross Whiteley is a destructive T20 hitter who as broken into Worcestershire’s County Championship of late. He produced some strong innings in the One-Day Cup and has been collecting the odd wicket too. Sussex’s Harry Finch complete’s my batting line-up.

Tom Moores has seamlessly assumed Chris Read’s position behind the stumps at Nottinghamshire and he’s my gloveman this year.

Hampshire’s Liam Dawson has broke the record for England Lions One-Day bowling figures three times this year and fellow slow-left-armer Samit Patel performed superbly when opening the bowling in the Pakistan Super League last time out. With dry pitches all around the country these two should prosper and might be competing for a place on England’s tours of Sri Lanka and West Indies. Patel, with his all-round capabilities dons my captain’s armband.

AJ Tye didn’t have in easy against England in the ODI series or T20I but will come good for Gloucestershire at domestic level. Many county batsmen just can’t read what’s about to come out of his hand. Matt Coles has broke into the Essex XI and could actually be a useful option for England. He’ll take wickets and biff it with the bat too. Adam Zampa should enjoy the current Australian like English terrain Harry Brookes has broke into the Warwickshire side this year. He’s a capable willow wielder despite his listing s a bowler.

They’ll be an update at the end of the T20 Blast to see how my team performed.