Brexit uncertainty continues, power outages frustrate and flooding wreaks havoc. Food prices go up as does fuel but protestors are shot down. TV shows reach their season finale, VAR prevents a goal and people find themselves unemployed after years of dedicated service. House prices go up as does the cost of your holiday but trees still fall. Promiscuous youngsters are considered role models, endangered animals go extinct before our very eyes and uncontacted tribes become contacted and face the possibly deadly consequences. Despite all this, cricket continues…

After seven ODIs on the bounce we returned to the Test format in the territory of arch-rivals Scotland. The players survived the treacherous voyage north of the borderline but found re-adapting to the game’s longest format challenging. Maybe we need to rethink our selection policy and have fewer players straddle dual formats.

Dawid Malan (25) displayed promise at the top order in an opening stand of 49 with Haseeb Hameed but committed the schoolboy error of not having a look when part-timer Roman Bruce came onto bowl and immediately became only Braveheart’s second Test victim.

Ben Stokes, who you might have anticipated would be a little more at home in the alien conditions provided his familiarity with northern surfaces, was bowled when opting to leave having made only 8 (My wife walking up to me with our youngest daughter in hand contributing to the Durham man’s demise!). Leader of men Joe Root was caught at slip for 11 before Hameed and Moeen Ali set about repairing the damage. Hameed (67) was needlessly run out however when a century beckoned and Moeen (51) was caught behind the very delivery post posting fifty. 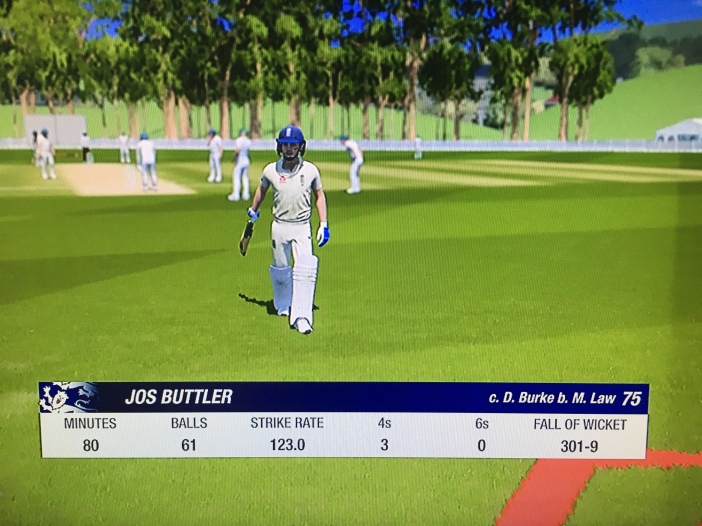 Jonny Bairstow was bowled first ball but an under pressure Jos Buttler (75) alongside Sam Curran (56) batted maturely to propel us from 180-6 to 295-7. Chris Woakes was less mature when caught behind for 6 which left last men standing Stuart Broad and James Anderson to extend the score. Coming together at 301-9, Broad was dropped just three runs later and Scotland were made to pay somewhat. Our opening bowlers lifted us to 329 with Anderson falling for 18 and Broad left not out on 10.

It was a rather juxtaposed innings with a number of batsmen looking in glorious touch and executing some majestic shots but only Moeen and Curran can really say that they were got out. Spin duo Martin Law and Mark Watt astonishingly claimed identical figures of 3-57.

In Scotland’s first venture to the crease, Stuart Broad soon dismissed opener Mahdi Clay (5) to leave the home side 9-1 before the ultra-aggressive Kyle Coetzer (150) alongside a more steady away Caden McCarthy (81) batted for the rest of the day. Possibly distracted by thoughts of a century, McCarthy soon fell to Broad the following morning. The impressive Broad then claimed a third victim when he trapped Burke (6) LBW before Chris Woakes stoked the fire further by claiming three wickets of his own. Coetzer was roughed up by Sam Curran bowling around the wicket before Woakes terminated his expansive innings. Out of nowhere Warwickshire’s Woakes was suddenly bowling at his peak. Curran himself as well as Stokes then both got in on the wicket taking action as Scotland collapsed from 195-1 to 302-8 at the end of day two.

Scotland’s tail wagged a little the following morning before Watt (21) and Abdulrahman Egan (12) fell to the excellent Broad (4-59) and Anderson (1-51) respectively. The home side’s efforts equated to 318 meaning that we effectively commenced our second innings on 11-0.

Dawid Malan (37) and Haseeb Hameed compiled 63 second time around before Malan edged a tame chance skyward when trying to deflect to leg. The Middlesex man had once again laid the foundations but only produced a promising not substantial innings. Ben Stokes made a brisk 31 whilst compiling 67 with Hameed before Hameed himself, who’d gone over the top a few times, inside edged when attempting another grand shot and looked rather ugly in falling for 76. 175-3 was the score come the respite.

The evening session’s premier delivery resulted in Root (13) edging behind and Jos Buttler (14) didn’t last much longer. The unheralded medium-pacer Roman Bruce (3-111) was chief-tormentor yet again. Jonny Bairstow should’ve been out to the next delivery but Scotland’s close fielders inexplicably failed to attempt the catch despite replays confirming that the ball had deflected off the Yorkshireman’s glove. As a result, YJB avoided the ignominy of a king pair but it mattered little as he soon succumbed to spin for just 2.

Just as Scotland sniffed a serious chance of making their run chase more manageable, Moeen Ali and Sam Curran (60) combined for an exhilarating 104-run partnership to seemingly take the game away from the hosts. Chris Woakes fell for a breezy 11 when attempting a maximum but to the next delivery Moeen Ali performed something possibly unique. The left-hander reached a century from only 56 deliveries courtesy of an all run 5!

Stuart Broad (14) briefly entertained before becoming Martin Law’s (4-76) fourth victim of the innings. Moeen (120 not out) and James Anderson (12 not out) lifted the score to 399-9 before we declared. Bizarrely, spinner Mark Watt wasn’t called upon to bowl during our second innings. Scotland were set 410 for victory with a few overs to negotiate at the end of day three.

Scotland’s chase got off to an inauspicious start when Clay was comically stumped by Bairstow of the bowling of Anderson to the last delivery of the first over. 0-1 soon became 13-2 when Anderson struck again. This time it was was key man Coetzer trapped LBW for only 7. McCarthy and Bruce resisted despite Stokes originally winning an LBW appeal before it was overturned however Moeen Ali struck first ball to dismiss McCarthy (40). Bairstow pouched the edge to end the 74-run combo with Scotland still a mammoth 324 runs shy of victory. Unbelievably, Moeen then repeated the trick with the first ball of his second over. Left-hander Gene Moore was caught behind without scoring to complete a disappointing Test match for the left-hander and another dismissal for Bairstow.

On the fourth morning the home batsmen saw off James Anderson but Dorian Burke perished to the Moeen/Bairstow combo having crafted an elegant 29. Roman Bruce then converted form with the ball into form with the bat by compiling a magnificent career best 148. Bruce compiled a 167-run stand with Martin Law and really opened up having passed the century mark. However, with 104 still runs required for victory, Bruce was bowled by Moeen off the second ball of day five. Captain Joe Root, whose captaincy on day three was heavily criticised in the media, deserves huge credit for starting the day with Moeen when the ball was only ten overs old.

Law then added an immensely frustrating 70 runs with the resolute Saul Skinner as Scotland closed in on victory. Eventually, having switched to bowling around the wicket, Sam Curran got Law to play on to his stumps via an unnecessarily excessive forward defensive shot. Law (127) had finally fallen having contributed a superb maiden Test ton to put his side within touching distance of a famous win.

James Anderson soon snapped up Mark Watt for 1 courtesy of Joe Root in the slips with Scotland still 30 runs shy of victory and suddenly we looked like favourites. It wasn’t to be…

With Scotland requiring 7 runs for victory, Moeen Ali and James Anderson bowled back to back maidens before we gifted the home side four overthrows. More maidens followed but Scotland went onto win by two wickets with a composed Saul Skinner (39 not out) and Abdulrahman Egan (18 not out) seeing them home. Huge respect to Skinner in particular who endured a chastening game with the ball but faced 119 deliveries to seal an amazing run chase.

To say that Moeen Ali didn’t deserve to be on the losing side would be an understatement of epic proportions.

For us, it’s back to the drawing board after another defeat against a Scotland side that we failed to defend a total in excess of 400 against for a second time in this competition. That’s six wins from six for the Scots and, with us level on points with Ireland, means there’s little room for manoeuvre if we hope to make the final where we’ll almost certainly take on Scotland once again. Next up we host Canada (W3L3) at Lords. Our squad for that match will be announced soon.