It’s safe to say that our captain, Xavier Le Tallec, isn’t a great tosser! He made it a hat-trick of toss losses in Paris but for a change we were inserted to bat. Given that we hadn’t yet reached three figures in an innings that seemed a reasonable decision by the Oman captain. Against international opponents for the first time but still officially playing an unofficial warm-up match, we strolled confidently to 24 without loss. Upon reaching double figures for the first time in his career though, Jean-Luc Chevalier was bowled for 10. Having raised everybody’s expectations we soon reverted to type. Gabin Sauvage was dismissed first ball before Matteo Phillipe made it three golden ducks in five innings. 24-0 became 28-5 and nobody but our openers reached double figures. 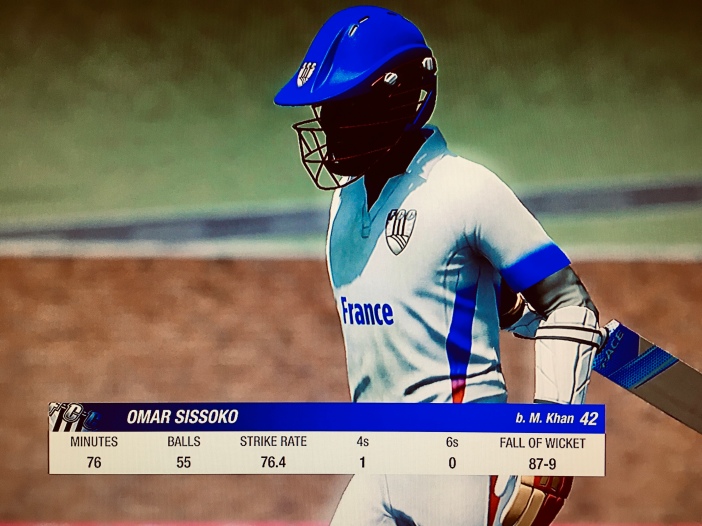 All the while that wickets tumbled around him however, Omar Sissoko followed scores of 9, 29, 16 and 15 with a dominant knock of 42 to cement his place as the lynchpin of our batting unit. With the little help of a due-delayed start we actually batted throughout the entire morning session but a team aggregate of 87 all out had an all too familiar feel about it. Given the useful opening stand and Sissoko’s contribution, to fail to reach three figures at the fifth attempt was bitterly frustrating.

Despite disappointment with the batting effort yet again, I was absolutely delighted with our bowling effort and fielding standards. We reduced Oman, a team that has played at ICC tournaments in recent years, to 106-6.

The first two wickets to fall came courtesy of catches, polar opposite in their difficultly, from Christophe Martinez in the slips. Zidane Thomas struck twice in two balls and Matteo Phillipe (1-14) put his batting struggles to one side to claim his first wicket in a French shirt. Oman repelled well however to see out the day without further damage. The following morning they had moved onto 177 before Thomas induced an edge. This time though Martinez seemed slow to react and put a relatively straight forward slip catch down. Maybe he hadn’t had enough croissants for breakfast! It mattered little however as the very next delivery Thomas (4-39) found the edge once more. Wicketkeeper Maxime Bernard flung himself full stretch to his left to claim a magnificent one-handed catch. For the second consecutive day Thomas claimed two wickets in an over to leave Oman 178-8. By the time Paco Georges (1-54) curtailed the innings on 227, gloveman Bernard had pouched five catches. We would need to score 140 to make Oman bat again.

What followed was an all too familiar ‘Build our hopes up then knock ’em down’ batting display. Despite the loss of Sissoko (3), Chevalier and Sauvage (15) lifted us to 43-1, as good a position as we’ve ever been in with bat in hand. We soon slumped to 49-6 however with Phillipe registering a fourth duck in six innings, Martinez failing to reach doubles figures for the fifth time and Bernard falling first ball to leave his top score after six innings… 5!

As carnage ensued all around him, Chevalier batted gracefully to stroke his way to a career saving career best 27 before being the last wicket to fall. 67 all out having been 43-1 therefore losing nine wickets for just 24 runs was another pitiful performance. The margin of defeat an innings and 73 runs and the time for change is upon us. The depth of French cricket is about to be tested!